I've had an Apple Watch for a few weeks now. It's a funny little device. Its utility and wow-factor aren't immediately apparent, and my first reaction after booting it up for the first time was "Okay, that's cool. Now what?" There's no flashy demos or life-changing features, but it slowly worms its way into your routine as an alternative means of interacting with your iPhone*. 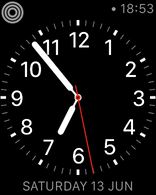 I have the lower-end Sport model, and even at its cheapest price point, the build quality is light-years ahead of the plastic-y feel of the first Pebble. So far, the watch has taken quite a beating — my 7 month old loves hammering the screen and tugging on the band, so it's pretty resilient and I haven't noticed any scratches on the face (yet).

One of my favourite features of the Pebble was that I could safely skip through podcast ads while driving, using the dedicated hardware buttons. This is difficult to do with the Apple Watch, as you need to use the touchscreen or Siri — neither of which are 100% reliable when you're attempting to use the watch eyes-free. I would like to see the side button repurposed to an "Action" button that would behave differently depending on the current app — in Music, this could be the skip / forward button, for example. I'm not confident that will happen, but one can hope!

Taptics are cool, if a little under-powered. It's a weird sensation at first — definitely more of a tap than a standard vibration. It reminds me of getting a very light electric shock, without the painful sting (showing my electronics background here). Even at max setting, however, I've missed quite a few notifications — usually iMessages, so I'm not 100% sure if that's actually a software issue instead. I've started wearing the watch strap a notch tighter, which seems to have helped somewhat.

The built-in watch faces are fun to tinker with, but the "complications" provided are very limited right now, and some of the choices are a bit strange. For example, if I have an analogue face, but want to also show digital time as a complication, I can use the World Clock complication. That's does exactly what I want, except that it insists on showing "DUBLIN" or "DUB" next to the time, depending on the watch face. Firstly, I'm in Galway (which isn't a selectable city) and secondly, I would prefer if it gave me the option to remove the city name altogether — it's totally unnecessary. For now, I've resorted to changing the DUB to a single "•" character (complications don't support emoji either 💩), which looks a little odd, but better than the alternative.

Siri on the watch works better for me than it ever did on iPhone. Sending dictated texts is great, although I wish it could turn off the prompt to send as text or audio clip and always send as text. This would help speed things up a little. (Update:@amanakbar kindly pointed out that there is a setting to do exactly this in the Apple Watch iOS app).

Taking calls is seemingly useless at first, but it actually works great in the car, and I've been told that the audio quality on the other end is perfectly fine.

I was initially concerned about battery life, after having read a few rumour sites prior to the launch of the watch. To date, I've yet to see my watch run out of battery, even after being used heavily over the course of 16+ hour days. The battery level is usually hovering around 30% when I set it down to charge at night.

I tend not to have too many notifications hitting my watch, so that probably helps a lot with battery life. Phone, messages, calendar events, and Twitter mentions are enough for me. Enabling apps like WhatsApp would be quite distracting, so I tend to err on the side of essential notifications only.

A lot has been written already about the Activity app (and HealthKit) and how it's starting a revolution in fitness and will improve health the world over, blah blah blah. It's a nice marketing spiel for Apple, but I don't buy into that hype at all. Similar to the JAWBONE UP and Fitbit, the onus is on the wearer to work toward their goals. The watch is not some magical device that will motivate you to get fit — you need to want to do so for yourself.

And if you are in that mindset, Activity works really well. The watch is very good at coaxing you into exercising more. I'm only just getting back into running after a few months off (let's call it "parental leave"). On days where the Exercise ring is not filled, I feel a strong urge to get out there and run.

The Stand reminders are useful, and much appreciated, as I work sitting at a desk all day long. I also use my Stand time as an opportunity to fetch a glass of water for myself, which I rarely did before getting the watch. I still don't drink enough water, but it's a healthy habit to get into and I'm glad I have the watch to remind me to do so.

Speaking of healthy habits, the Workout app is very cool. I love the way it taps you for 1km intervals when running or walking — it's a subtle indicator and gives a nice, little motivational boost during the activity.

On my first run with the watch, I tried using the Runkeeper app coupled with my iPhone. Unfortunately, due to hardware limitations, and some funky bugs in Runkeeper, it turned out to be a bit of a disaster. I ended up with about three different runs recorded in Runkeeper and lost some data. I also dislike running with my phone, even in an armband strap — it's just too bulky and expensive to be carrying around during a workout.

Update: I've since released a free app that combines the watch's heart rate with your RunKeeper activities. Download it here.

Despite all its V1 flaws and limitations, I'm enjoying the Apple Watch, and I'm excited to see it improve over the next few updates (both hardware and software). I'm still unsure if the app ecosystem will take off as well as it did on iPhone, but even with the stock apps alone, it's a solid purchase for gadget geeks. For non-techies, it will be a harder sell for Apple. It just isn't a device you need to own right now, and that's a difficult obstacle to overcome for a €300+ gadget. It's not an iPhone on your wrist — not yet — but it's a very useful accessory for one.

* If this post looks too long for your liking, check out The Oatmeal's strip on the Apple Watch: https://theoatmeal.com/blog/apple_watch

** As an aside, I prefer the watch for heart rate measurement versus the chest strap that came with my Polar — I'm sure it's less accurate, but it's by far the more comfortable option.

*** I'm currently cobbling together a little app that will export the heart rate measurements from HealthKit and upload & associate them with the corresponding run on Runkeeper. More on that whenever I get around to actually finishing it.